Volcano Copahue Erupts on the 22nd

Several Volcanos have started to erupt in December.  To add to the list is the Copahue volcano which has erupted December 22nd.  The authorities in Argentina and Chile have issued an alert over increased activity. Planes flying over the southern Andes have also been warned. Hundreds of flights were cancelled last year due to the eruption of Puyehue volcano. The date predicted was correct, and the reference to the airport must represent the cancellations that are coming. In hindsight I do not think they were ‘intentionally hindering the clarity’. I assumed they were talking about one massive issue instead of a wave of several different volcanos erupting in December.   http://www.bbc.co.uk/news/world-latin-america-20828832

Finally the notes of the Prediction that is holding everything up Mass Destruction: A visual of mass smoldering smoke covering a massively large area. Smoke has in the past represented destruction. The scope of the destruction was massive and the scene showed an icy land, but is that symbolic to an icy, cold tone? I assumed it meant a volcano and that’s a strong possibility, because I can’t really imagine anything else creating such enormous damage. But there are other more questionably cautious possibilities, a bomb, a chemical attack or spill.  One message said, “Anyone who stays behind will probably not survive.”.  This situation is slotted for the end of December and was given the number 22. In some ways I hope it’s a Volcano eruption because the other glaring possibility is the sum of fears out of Syria.” – Predicted December 5th under Coming Predictions

More vague information on the “Mass Destruction” prediction. This time I was standing in an airport that looked very unkept. There were windows for walls and outside a huge mist like black smoke blanketed the entire area. You could not see outside of the airport just smoke. As I mentioned before the smoke represents destruction. At this point it looks like they are intentionally hindering the clarity of the information. They perhaps don’t want to show me too much because it’s too horrific. Predicted December 10th under Notes 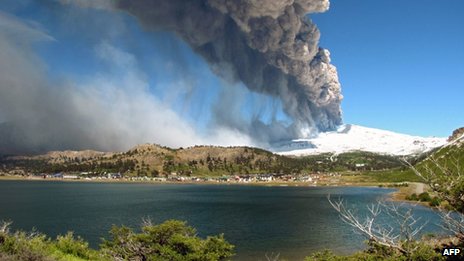 2 responses to “Volcano Copahue Erupts on the 22nd”