Prediction 6: The Precipice of 2012 posted March 8th is starting to unfold. The events of today reflect a precursor to whats coming:

The decade of 2010 (12) is marked as the beginning of global problem, ‘climate change’. Tornadoes mount, Hurricanes grow in size, record summers and record-breaking winters, and so many floods upon floods ravage the world violently. The debate of the left and right ends as the oceans begin to consume pockets of the world’s land. Slowly each year the lands are consumed.

So many of you have asked about the infamous 2012 end of the world prediction. I am sorry but as December 2012 ends January 2013 begins, it’s just another year. With that said when I asked about this doomed hyped prediction they change the subject to the precipice of this Century which is climate change and how humanity as a whole is grossly underestimating the problem that is at the doorstep. This is the first of several predictions that discuss Climate Change and whats coming because of it. The closing of 2012 shows the beginning of a real problem. Original Post:  http://worldwidepredictions.com/2012/03/08/prediction-6-the-precipice-of-2012/

Sea-ice extent matters for a number of reasons. Because less sea ice means the  oceans absorb more of the sun’s energy, the decline in sea ice is expected to  accelerate the  effects of global warming. Quoted by: http://www.businessinsider.com/arctic-ice-melt-blows-away-previous-record-2012-9#ixzz26ywgOfhCnal Snow & Ice Data Center,  which tracks sea ice using satellite data. 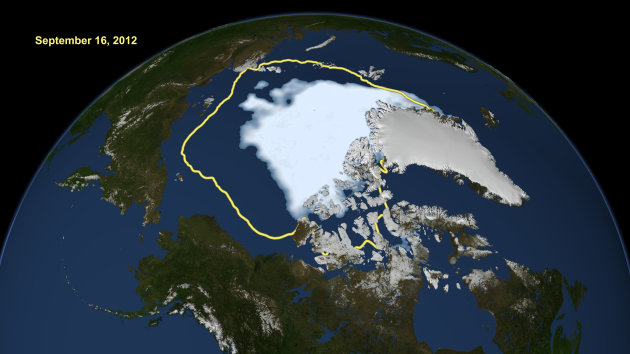